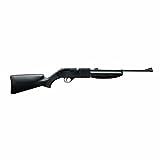 The Pumpmaster 760 is known for its short stroke, high compression pump action giving shooters of all ability levels an sizes fast easy firing. A reservoir holds up to 200 BBs and for pellets, there is a convenient 5 shot manual clip. The maximum velocity is up to 625 fps (feet per second) with BBs, and 600 fps with pelletsThe Crosman Pumpmaster 760 has been one of the most popular air rifles on the market since it was first released in 1966. A full-scale replica of a pneumatic rifle, it’s known