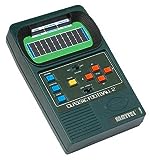 The Mattel Classic Football 2 Game is the next generation of electronic football with passing and kicking features, as well as backward movement. Just like the original game, it plays like real-life football. Designed for 1 or 2 players, this electronic ball game lets kids compete against each other and the computer.Age: 8 to 12 years