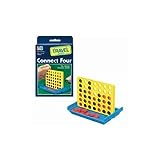 4313 Features: -The original vertical four-in-a-row checkers game in a travel version for fun on the run.-For ages 10 and up.