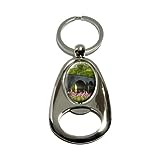 Impress your friends with this premium bottle cap opener keychain!

This keychain is made of chrome plated metal with the printed and urethane encased design on both sides of the center spinning oval. The size of the main keychain is approximately 2.25″ (57mm) in height and 1.5″ (39mm) in width.

This low profile hard protective plastic case fits the Apple iPhone 4 and Apple iPhone 4S. All the iPhone buttons and the charging jack are fully accessible while the case is installed.

Ken Burns’ Emmy Award-winning documentary brings to life America’s most destructive – and defining – conflict. The Civil War is the saga of celebrated generals and ordinary soldiers, a heroic and transcendent president and a country that had to divide itself in two in order to become one. The 150th Anniversary Six Disc DVD set includes never-before-seen special features including new interview with Ken Burns, Shelby Foote interview outtakes, and a bonus 16-page collector’s booklet featuring a se

Fashion-forward for those in the know. Be an individual. Rebel.