From Dragon Models! A Previews Exclusive! If The Avengers was the most anticipated movie of 2012, then the title for 2013 undoubtedly went to Marvel’s Iron Man 3! Since the world renowned kit producer Dragon Models last brought you their popular Avengers line of products, Dragon’s Advanced Research & Technology Team (D.A.R.T.) has been hard at work to bring you their latest line of Iron Man 3 items! Developed in 3D, using official data from Marvel, the MK. XXXIX Starboost Armor is highly detaile

2009 TRISTAR trading card in near mint/mint condition, authenticated by Seller 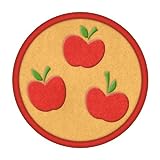 Fluttershy’s cutie mark is featured on this adorable cloth patch from My Little Pony. Add a little laughter to your ensemble.

The Mark of Athena (Heroes of Olympus, Book 3)

The Mark of Athena (Heroes of Olympus, Book 3)

In The Son of Neptune, Percy, Hazel, and Frank met in Camp Jupiter, the Roman equivalent of Camp Halfblood, and traveled to the land beyond the gods to complete a dangerous quest. The third book in the Heroes of Olympus series will unite them with Jason, Piper, and Leo. But they number only six–who will complete the Prophecy of Seven?
The Greek and Roman demigods will have to cooperate in order to defeat the giants released by the Earth Mother, Gaea. Then they will have to sail together to