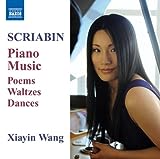 Numbered among the musical elect of her generation, the multi-award-winning Xiayin
Wang presents a recital of piano music that virtually spans Scriabin’s career. The
mysterious impressionism of Vers la flamme (Towards the Flame) builds to an
exhilarating intensity that is matched by the two contrasting Poems. From his early
Waltzes and Polonaise, with their echoes of Chopin, via the rhapsodic abandon of the
Fantaisie, to the Two Dances, composed shortly before his death, these wor