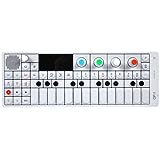 All in one portable

OP-1 is the all-in-one portable Synthesizer, Sampler and Controller. With additional features like the FM Radio and an assignable G-Force sensor for motion controlled effects. With OP-1’s built-in Tape feature you are able to record everything you do on to the 4 tracks, with overdubbing, reverse recording.